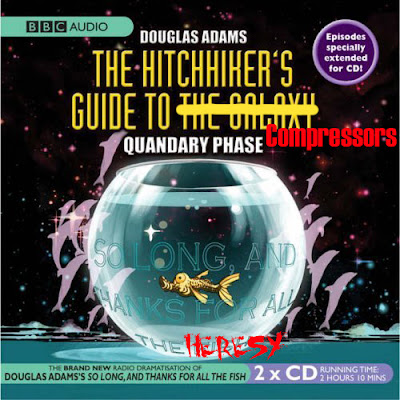 Or, which compressor should I buy?  Similar to Adventures in Airbrushing Episode I, in Episode III I will be listing some guidelines on which compressor to buy as well as some examples.  If you haven't read it already, be sure to check out Episode II for an in-depth guide to many of the benefits and features available to be sure you know what you are looking for. So get ready, sit back and let me, Chaosheade, and M4XVLTG3 guide you on your own personal compressor journey.


Where to Buy - General List
I just want to add that there are large savings that can be made when you perform market research from the  very beginning. Ten dollars here and there can add up. That's funding for your next big model!  Yep, that's one of the reasons for creating this series.

Campbell Hausfeld 1 Gallon Pancake Air Compressor ~$55 in store
At first this seemed like a pretty good buy.  It's nice and cheap, it's got an air tank, and did I mention it's cheap.  I would need to buy a filter/moisture trap but I could get one for about $8 and the only other thing I would need to worry about is the right size hoses and adapters if necessary.  My inner cheapskate liked it, but I didn't know how loud it would be.  A little more research led me to Walmart's website where I found some reviews.  3.3 stars out of 5 didn't look great but I dug deeper and after reading some reviews I quickly lost interest in this compressor. Lots of complaints about the compressor being extremely loud, even louder than most other non-hobby compressors and more than a few people complaining that it crapped out on them after about a year
The Verdict:  Don't even think about it unless you're reeeeeealy desperate for the cheapest compressor you can possibly find.  It will probably do the job but the prospect of having to replace it after using it for a year defeats the whole purpose of saving money on a cheap compressor.  It's like buying el cheapo paint brushes versus buying good quality brushes and taking good care of them.  You save money initially by buying the cheap brushes but you have to keep replacing them and they end up costing you more money in the long run.  I decided to stay away from the Campbell Hausfeld brand compressors.

Central Pneumatic 3 Gallon, 100 PSI Oilless Pancake Air Compressor - on sale for $60
Similar to the previous compressor but with a larger air tank.  With shipping it is a little more expensive than the Campbell Hausfeld and also requires the moisture trap, air hose and possibly adapters.  The reviews on this one are much more positive and most of the negative reviews are due to someone trying to use a cheap entry level compressor for more pressure-intensive air tools that it simply is not designed to work with.  It's like buying a BB gun and going bear hunting with it and then complaining that it didn't work.  Of course it's not going to work on a bear, it's a damn BB gun! LOLZ
The Verdict: Seems like a fairly solid compressor that offers good value for the amount of money you are spending on it.  With shipping, moisture trap, air hose, and everything included you can get a decent setup for under $100. All in all this seems like a decent deal.

Central Pneumatic 2-1/2 HP, 10 Gallon, 125 PSI Air Compressor - On sale for $150
The big boy.  If you like fast cars, big trucks, greasy burgers, and want a compressor that will jack you in the jaw and say "thanks for comin' out" then take a look at something like this.  This type of compressor is definitely more than you really need for airbrushing but its huge tank and powerful compressor does have some advantages.  No hobby compressor will ever be able to offer this much power and air tank capacity, especially not for the same price.  A compressor like this one will let you fill the tank during the day when you won't wake everyone up and the 10 gallon tank should give you several hours or more of continuous airbrushing without any compressor noise at all.  Periodically you might find a similar compressor on sale at your local home improvement store for about $100.
The Verdict: If the word "overkill" is not in your vocabulary or if you want a huge air tank that will let you keep working for hours without running the compressor at all you might want to look into something like this.  Make sure you have the space for something like this because it's not small.  No, no, no. I'm torn! I think this compressor reflects the manliness that is inherent in my manliness, but I could use the space that I would save with a smaller compressor for a shelf for drying my models...
Review:
There are literally hundreds if not thousands of tool air compressors out there.  Just find the one that will get the job done for the right price.

Hobby Compressors:
There is much more variation between different hobby compressors than the non-hobby compressors.  Hobby compressors come with a much wider variety of styles, features, and just about everything else.  For this section, I'll go for the cliche'd The Good, The Bad, and The Ugly ratings.  The Good will give you the best bang for your buck.  The Bad will not necessarily be "bad" per se, but they will not be as cost efficient or have some other minor flaw.  Compressors that fall into The Ugly category should be avoided at all costs.  If you even think about purchasing one of these, you should punch yourself in the genitals or wherever it would hurt the most until you decide to buy one of The Good compressors instead.  For this section is it more important to know what the extra features do and which ones you do or do not want.  Here is the link again so you don't have to scroll up to the top of the page: Adventures in Airbrushing Episode II.

Basic Models: Single piston compressors with few or no extra features past a hose and regulator/moisture trap.  Definitely not the best you can get but if you're on a tight budget these will push enough air to get you going.


Good: Airbrush-Depot Model TC-20 and TC-06 - $109.98
Basic off-brand compressor.  The TC-20 comes with an 1/8" air hose connection while the TC-60 is slightly more powerful and has a 1/4" air hose connection.  Both compressors are much more powerful than any other compressor at this price range and should handle anything you want to use them for.  The only concern is that it is an off-brand but it does come with a full 2-year warranty so you should be able to get it fixed/replaced if something goes bad.

Good: Badger 180-10 Whirlwind - $154.95
This one is really starting to push the envelope between The Good and The Bad.  It has an on/off switch, suction cup feet and claims to run 30 PSI for most airbrushes.  A little more expensive but a solid choice for a basic compressor.


Bad: Paasche D500SR - $104.95
The cheapest name brand basic compressor.  If you don't trust the no-name brand but don't want to pay for the "big names" the Paasche offers a nice happy medium.  Will push 20-25 PSI depending on your airbrush.  This may be a little lower than you need if you want to prime/base coat your whole army at 30+ PSI but for most other uses it will do fine.  This would be in the Good category if it were not for the Paasche D300R in the mid-range section that offers more power and features for only $10 more.
Bad: Airbrush-Depot Model TC-09 - $149.95
Similar tot he TC-06 but more powerful.  Also has the 1/4" connection.  This is simply way more power than you need and you can save money by buying the TC-06.

Bad: Iwata Sprint Jet IS-800 - $189.95
Working pressure up to 35 PSI.  Very similar to the basic compressors of other brands but you pay a premium because it says "Iwata" on it.  I'm sure it's a good compressor, but I'm equally sure that the Badger, Paasche, or even the Airbrush-Depot compressors will work just as well for much less.  If you're in love with Iwata then go for it, but I can't rate it with The Good since one of the points of this series is to save money.


Ugly: Airbrush-Depot TC-60 "Salon Air", TC-18 "Salon II", and TC-16 "Elephant Shaped Mini Compressor"
You should probably avoid anything with "Salon" in the title.  These are much weaker than The Good compressors in this category and will cost just as much or more when you add in the cost of the moisture trap and anything else you will need to make this work with your air brush.  The "Salon Air" is particularly bad since it costs $20 more than the more powerful and more functional TC-20 or TC-06.

Ugly: Iwata Ninja Jet IS-30 - $129.95
Iwata should be ashamed of this piece of garbage.  There is simply no excuse for a compressor with a retail price of $250 for a 1/12 HP compressor that only has a working pressure of 5-18 PSI, especially from the company that is generally considered the Cadillac of the airbrushing world.  This thing is weaker than the salon and novelty elephant shaped compressors.  Don't let the brand name fool you.  All this compressor will be is a very expensive, albeit stealthy, paperweight.


Mid-Range: More features than the basic models but do not come with all the bells and whistles like an air tank.  A compromise between price and function.


So there you have it.  It might not have every single compressor on there but it's got 95% of the ones that are relevant to our interests.  You have everything from the basic bare bones compressor to the really nice ones that come with an air tank and lots of fancy features and all the information you need to get the right compressor for you at the right price range.  Also, don't forget that the Bad compressors are not necessarily bad, they are just not as cost efficient.  If you have your heart set on a compressor that I categorized as Bad and you don't mind spending a little extra and getting less value then I'm not going to stop you.  Just promise me that you won't get one of the Ugly compressors.  Seriously, I just can't recommend them at all.  And that's all I got to say about compressors.

Thanks for tuning in, we hope you enjoyed the show.  As always, please don't hesitate to leave a comment or suggestion, or let us know if you think I got something wrong.  This is the internet, after all.  I think it's written somewhere in the by-laws of the internet that everyone has a quota of telling other people that they are wrong so feel free to fulfill your obligation here.  In the next installment of Adventures in Airbrushing we will cover general accessories, tools, cleaning supplies, and anything else you might want/need for your airbrush.  Until next time this is Chaosheade and M4XVLTG3 signing out.  Catch you on the flip side.