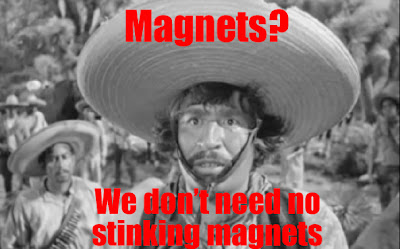 Hello and welcome to another tutorial by Chaosheade.  In this tutorial I will show you how to model the humble Termagant so that you can swap the weapons between the standard fleshborer and the much more shooty devourer and the best part is we will not need a single magnet.  Not a single one.  Any Tyranid player can tell you that if you play Nids you will probably end up with a TON of termagants especially if you plan on using Tervigons at any point.  Instead of using up your precious stock of magnets or ordering different size magnets just so you can magnetize smaller bits, we will be using the humble paper clip.  Using this tutorial, 10 cents worth of paper clips can do the work of $10 worth of magnets.  Learn more after the jump.


I came up with the idea when I was assembling my first box of Tyranids, some humble Termagants.  I wanted to be able to swap weapons which immediately made me think of magnets.  Being the stingy cheap frugal gamer that I am, I cringed at the thought of having to use a ton of my precious magnets on the hordes of 'gants that I will eventually have.  At first I tried to think of ways to minimize the number of magnets that I would need, but then I came up with a solution that would not require any magnets at all!  Enough gum flapping, let's get down to business.

The tools you will need:

The parts you will need:

I will assume you can figure out how to assemble the body and head of your gribblies.  Go ahead and do this now.
*Now, before you start actually cutting things up make sure you read through the whole tutorial, especially the notes at the end.  Don't blame me if you jump ahead and start working before reading everything and find out that you have messed something up and don't know how to fix it.*

Step 1: Cut the barrels from each gun.  This is where I made my cuts.  The fleshborer can be cut differently if you don't want it to be super long.  I wanted to keep the little eyeball thing on the gun, which makes the end result longer than if you cut it in front of the clip.  Make sure you don't cut too much off the arm half of the devourer arm.  The gun would look funny if the little "v-j detail" (as I like to call it, for the lack of a better term) on this side gets chopped off half way and you want the socket on the other side at least mostly intact so you can glue the two arms together.


This is what the pieces look like after being chopped up.  Do whatever you want with the fleshborer arm, you won't need it for this tutorial.


Step 2: Drill 2 holes in the devourer arm.  Don't drill too close to each other or you will end up with just one funky shaped hole instead of 2 normal ones.  Use your knife to cut a couple little guide holes before you start to get the spacing and position right.


Step 3: Insert and glue in 2 pins.  The length does not matter because you will be cutting them down.


Step 4: Once the glue is dry, cut down your pins so that they are equal in length.  Not too short or they won't grab on to the barrel end of the guns and not too long or you will end up drilling holes all the way through the barrels.


Step 5: Line up the business end of each gun with the pinned arm and press the pins in to make indentations in each gun barrel.  These will be your guide on where to drill the holes so that they line up with the other half.


Step 6: Drill out the holes in your gun barrels.  Go slowly and before you drill too deep check to make sure the holes line up with the pins.  Keep checking periodically as you drill out your holes to make sure everything fits together correctly.


Step 7: Now you can glue the arms to your termagant.  Make sure that your arms/gun won't be dragging on the ground when everything is assembled.  What I did was attach the fleshborer barrel to the gun while gluing the arms in place since it is longer than the devourer and more likely to hang too low.


And now you're done.  Nice and easy.  Whenever you want to swap weapons, just take off the current piece and put the other one on.  You may need to either cut/file down the pieces so they are more flush with each other or use a little putty/green stuff to fill in the gaps but that shouldn't be much of a problem.  If it's close enough it might not even be noticeable when it's painted.  On the opposite side of the fleshborer there will also be the little socket that the other arm normally attaches to.  Don't forget to cut/file this down or fill it in unless you want a gaping hole on the side of your fleshborer.

How it works:  Normally when you pin something, it's to hold it together more firmly such as heavy pieces of metal that can break normal glue and fall off.  Usually only one pin is used in these cases and the two parts can slide together and apart easily.  Using two pins prevents the pieces from rotating or falling apart easily and, unless you happen to drill everything and just the right angles, the pins and holes will not line up perfectly.  In this case, that is a good thing!  The trick is to get the angles just slightly off so that the pins go in the holes but have some resistance so they don't just slide off.  Since we are all human, chances are your pins will not be aligned perfectly so this will probably happen naturally.  As long as the angles are close enough to get the pins all the way in the holes you're good to go.  In the rare case that you do find the pieces falling apart, 1mm x 1mm cylinder magnets can be inserted in the holes to keep the pieces together.  The simplest option that you have if something goes wrong is bending the pins so they fit more tightly or loosely depending on the specific situation.

If you're not confident that you can get it right on the first try, practice on some sprue pieces or any other spare parts.  You can use magnets for this if you want but you will have to use a size smaller than the standard 1/8" x 1/16" magnets because they are wider around than the pieces of the guns.  I prefer to go the super cheap route and save my magnets for more important larger models.

Now that you have learned this technique, think of other cool things that you can do to "magnetize" your models without using magnets and share your ideas in the comments.  This is Chaoshead hoping you learned something valuable today.  Catch you on the flip side.
Posted by Chaosheade at 7:00 AM